The serial port is a low-level way to send data between the Raspberry Pi and another computer system. There are two main ways in which it can be used: 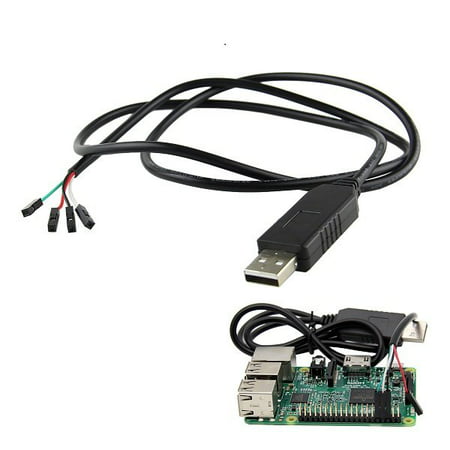 The Raspberry Pi serial port consists of two signals (a ‘transmit’ signal, TxD and a ‘receive’ signal RxD) made available on the GPIO header. To connect to another serial device, you connect the ‘transmit’ of one to the ‘receive’ of the other, and vice versa. You will also need to connect the Ground pins of the two devices together.

The Broadcom chip at the heart of the Raspberry Pi uses 0 and 3.3 V logic levels, not the +/-12 V used by RS-232 serial ports found on some older PCs. If you wish to connect one of these, you need a board or adapter to convert the signal levels. See this tutorial for one example on how to build a 3.3 V to RS-232 level converter with a breadboard, a MAX3232CPE IC and five 0.1 µF capacitors.

If you wish to connect your Raspberry Pi to a PC with a USB port, the simplest option is to use a USB-to-serial cable which uses 3.3 V logic levels (e.g. the Adafruit 954 cable, the FTDI TTL-232R-RPI cable, or the Debug Buddy ultimate serial port). These can be simply plugged in directly to the GPIO header (see illustration).

If you wish to connect to a peripheral which has 0/5 V signals, you should ideally have a circuit to convert between the voltage levels. See this tutorial for an example using a ready-made level shifter module. Other circuits for level shifting are shown at RPi_GPIO_Interface_Circuits#Level_Shifters. The Debug Buddy ultimate serial port can also be configured for 0/5 V signals.

NOTE FOR RASPBERRY PI 3: The Raspberry pi 3 has changed things a bit and you might need to add the option enable_uart=1 at the end of /boot/config.txt (see this post by a Pi Engineer)

Connection to a PC

You can connect the Raspberry Pi to a PC using a USB-serial cable, or (if it has an RS-232 port) a level-converter circuit – see above for details. When this is done, you will need to set up a terminal emulator program on your PC as described below.

The following parameters are needed to connect to the Raspberry Pi console, and apply on both Linux and Windows.

If your PC is running Linux, you will need to know the port name of its serial port:

You will need to be a member of the dialout group to access this port (for later releases the required group is tty). You can check which is needed with:

To find out if you, the current user, is in the group dialout, use the command:

If you do not see dialout listed, add yourself with the command

You then have a choice of terminal emulation programs:

Enter the command below into a terminal window

Run Minicom with the following parameters:

You can exit Minicom with Control-A x

Note: If you haven’t configured minicom before (i.e: first use after installation), or if you find that your keyboard key presses are not sent to the RPi, you should make sure Hardware Flow Control is disabled. See Tedious Old-Fashioned Way Using Minicom to configure minicom.

Start GtkTerm, select Configuration->Port and enter the values above in the labeled fields.

Step 1: Log in to the Raspberry Pi over the serial cable and run the Point-to-Point Protocol Daemon:

Some garbage will start appearing in the terminal. This is the cue to quit your terminal program and proceed to step two.

Step 2: On your local computer, start the Point-to-Point protocol. On a Linux or Mac computer you can do this by typing:

replacing /dev/tty.usbserial-FTGCC2MV with the name of your serial port. In the above line, 115200 is the baud rate of the connection, 10.0.0.1 is the local internet protocol (IP) address, the address you want your computer to have. 10.0.0.2 is the remote IP address, it is the address that the Raspberry Pi will have.

Virtual connection to the LAN

Instead of 10.0.0.0/8 you could as well use normal 192.168.0.0/16 addresses; the first address must be the real address of the local (serving) system. You can chose the second address; it must not yet be assigned on the LAN (and be outside the DHCP range). The advantage is that the system connected to the serial line will appear as if it is directly connected to the LAN (arp protocol).

On the guest system connected via the serial cable you must set the default route pointing to the serving system, e.g.

You should also configure /etc/resolv.conf if you want to use DNS.

Users of Windows Vista or later will need to download a terminal program, for instance PuTTY, or TeraTerm. Users of Windows XP and below can choose between using PuTTY and the built-in Hyperterminal.

PuTTY users simply need to choose ‘serial’, select the correct COM port and set the speed, as shown in the dialog below.

If you are unsure of the COM port, run [Device Manager] and look under ‘Ports’. USB-attached serial adapters should have the name of the adapter shown (the Adafruit cable comes up as ‘Prolific USB-to_Serial Comm Port’.

If your connection is set up correctly, when the Raspberry Pi is booted you should see many messages as the system comes up:

and so on. Eventually, you should see a login prompt:

You can then log in as you would with a keyboard and screen.

Note that on older software by accident the internal pullups of the RxD GPIO pins were not enabled, this could lead to lots of serial garbage being picked up if the GPIO pin was touched, or even if a finger was nearby. In extreme case this could lead to kernel warnings and other problems.

Connection to a microcontroller or other peripheral

If your microcontroller or peripheral works with 5V logic levels, level conversion is necessary – see ‘Connecting to a PC’ for details.

If your microcontroller or peripheral works with 3.3V logic levels then you can connect its TxD, RxD signals directly to the RxD and TxD pins of the Raspberry. However it’s probably a good idea to connect the signals with a 2.2 kΩ resistors in series. This will prevent damage if two outputs are accidentally connected together (e.g. if you connect TxD with TxD or if a GPIO input pin is accidentally programmed as output).

By default Linux will grab the serial port and use it as a terminal. If you want to use it for other purposes you must prevent this. Here are the methods you can use:

Run sudo raspi-config and check if it has the option advanced options -> serial. If it has, set it to disabled and you’re done.

There’s a nice little script to automate the steps bellow.

If neither raspi-config nor the script works for you then follow the hard way.

NOTE FOR RASPBERRY PI 3: The Raspberry pi 3 has changed things around a bit: ttyAMA0 now refers to the serial port that is connected to the bluetooth. The old serial port is now called ttyS0. So if you have an RPI3, everywhere you see “ttyAMA0” below, you should read “ttyS0”.

The Broadcom UART appears as /dev/ttyAMA0 under Linux. There are several minor things in the way if you want to have dedicated control of the serial port on a Raspberry Pi.

The console keyword outputs messages during boot, and the kgdboc keyword enables kernel debugging. You will need to remove all references to ttyAMA0. So, for the example above /boot/cmdline.txt, should contain:

You must be root to edit this (e.g. use sudo nano /boot/cmdline.txt). Be careful doing this, as a faulty command line can prevent the system booting.

You will need to edit this file to comment out the second line, i.e.

Finally you will need to reboot the Raspberry Pi for the new settings to take effect. Once this is done, you can use /dev/ttyAMA0 like any normal Linux serial port, and you won’t get any unwanted traffic confusing the attached devices.

The above instructions have been verified on Raspbian ‘Wheezy’; other distributions may be set up differently. To double-check, use

to show the current kernel command line, and

to search for getty processes using the serial port.

A tutorial on accessing the Raspberry Pi’s serial port from Python is available at Serial_port_programming.

When the serial port is opened the voltage on TXD pulses negative for approximately 32 µs (regardless of the baud rate). This pulse may be interpreted as a transmission by a device connected to the TXD pin, which could have unintended effects. An error tolerant communication protocol should be used to avoid problems this glitch could cause. Another method for avoiding problems is to use a GPIO pin to implement the RTS signal, and to have the connected device ignore all data on TXD until RTS is asserted. If the connected device is susceptible to the glitch and cannot be modified, it is sometimes possible to obtain correct operation by opening the serial port in advance of initiating transmission. This can be done in the shell with the sleep program:

In a shell script, the following commands may be used to kill the sleep process once serial transmission is complete.