There is no shortage of little portable tracker devices that you can attach to your keys or your dog to ensure you never lose the things that matter most. But Samsung has today announced the Samsung Connect Tag, one of the first mobile consumer products that uses the fledgling narrowband IoT (NB-IoT) standard to connect devices.

For the uninitiated, NB-IoT licenses small amounts of LTE cellular spectrum to carry data for low-bandwidth devices. NB-IoT offers many benefits, including strong coverage, greater power efficiency (to preserve batteries), support for many devices, and relatively low operational costs. As its name suggests, it was very much designed with the internet of things in mind, and moving forward it will likely be used to connect myriad IoT contraptions, from smart trash cans to parking bay sensors.

At just 4.21 centimeters wide and 1.19 centimeters thick, the Samsung Connect Tag is fairly small and sports an embedded SIM (eSIM), which is basically a non-removable, programmable “virtual” SIM that consumes less space and doesn’t require the user to install a physical card.

As with similar trackers on the market, the device can be put to any number of uses, such as finding lost keys or giving parents peace of mind when their kid is out and about. The Connect Tag works with GPS, Wi-Fi-based positioning (WPS), and Cell ID (CID) to identify location data indoors and outdoors. 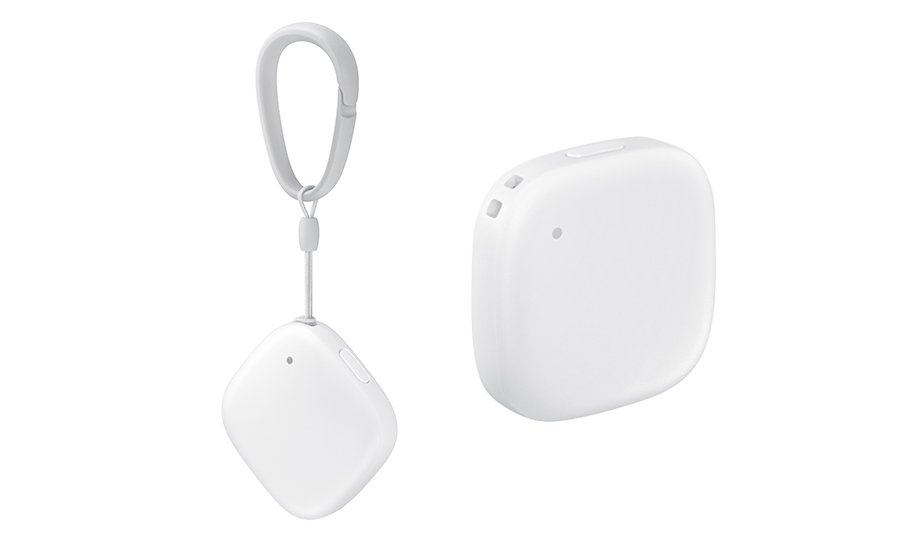 Building on Samsung’s push into the broader IoT realm, the Connect Tag works in conjunction with Samsung’s SmartThings Hub and the Samsung Connect mobile app so users can control and configure things remotely, while being able to integrate the tracker with other connected devices. For example, a user could set up a geo-fence zone for their home so that lights turn on automatically when the Connect Tag comes within a pre-defined perimeter. Alternatively, it could be used to notify a parent when their child arrives at school.

Though similar features and functionality already exist in other products, Samsung is touting the NB-IoT element as a key selling point. While it offers cellular connectivity for constantly tracking a specific person or product, it also promises “up to” seven days on a single charge, which is pretty good. However, we will reserve judgement until we can test one of these devices out for ourselves.

A number of companies have raised big VC funding for mobile tracking contraptions, including San Mateo-based Tile and Santa Barbara’s TrackR. Earlier this year, New York-headquartered Lynq announced a $2 million round of funding for a tracker that lets you find anyone in a radius of up to five miles. This tracker sidesteps Bluetooth, maps, Wi-Fi, and cell networks with a decentralized peer-to-peer (P2P) network that uses a mix of radio frequencies, a custom antenna, and a long-range low-powered chip.

Put simply, there is big demand for tracker devices, and it’s a market that Samsung is now looking to infiltrate. The company is debuting the Connect Tag at its developer conference in San Francisco later this week. But the device will first go on sale in Korea before expanding to “select countries” at a later date. Samsung hasn’t given any indication of price or launch dates.