Got a few thousand bucks and a good deal of engineering expertise? You’re in luck: Stanford students have created a quadrupedal robot platform called Doggo that you can build with off-the-shelf parts and a considerable amount of elbow grease. That’s better than the alternatives, which generally require a hundred grand and a government-sponsored lab.

Due to be presented (paper on arXiv here) at the IEEE International Conference on Robots and Automation, Doggo is the result of research by the Stanford Robotics Club, specifically the Extreme Mobility team. The idea was to make a modern quadrupedal platform that others could build and test on, but keep costs and custom parts to a minimum. 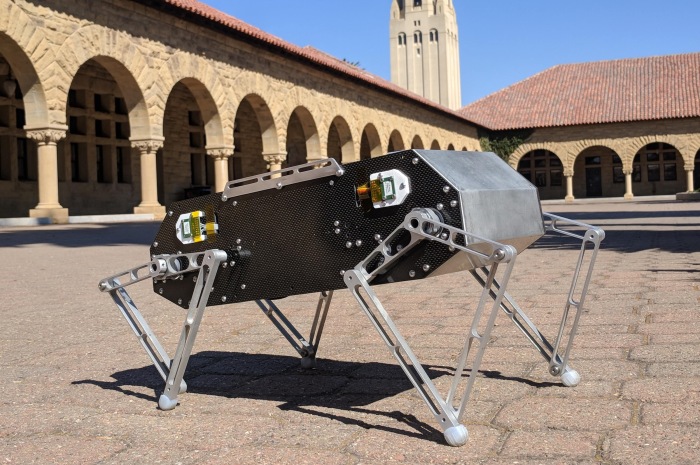 The result is a cute little bot with rigid-looking but surprisingly compliant polygonal legs that has a jaunty, bouncy little walk and can leap more than three feet in the air. There are no physical springs or shocks involved, but by sampling the forces on the legs 8,000 times per second and responding as quickly, the motors can act like virtual springs.

It’s limited in its autonomy, but that’s because it’s built to move, not to see and understand the world around it. That is, however, something you, dear reader, could work on. Because it’s relatively cheap and doesn’t involve some exotic motor or proprietary parts, it could be a good basis for research at other robotics departments. You can see the designs and parts necessary to build your own Doggo right here.

“We had seen these other quadruped robots used in research, but they weren’t something that you could bring into your own lab and use for your own projects,” said Doggo lead Nathan Kau in a Stanford news post. “We wanted Stanford Doggo to be this open source robot that you could build yourself on a relatively small budget.”

In the meantime, the Extreme Mobility team will be both improving on the capabilities of Doggo by collaborating with the university’s Robotic Exploration Lab, and also working on a similar robot but twice the size — Woofer.